NEWARK, N.J. (July 16, 2018) SJ Presents and WBLS continue the celebration of Circle of Sisters with Circle of Sisters’ R&B Live; an extraordinary lineup featuring soul and R&B icons featuring BELL BIV DEVOE, BOBBY BROWN, BRANDY, TAMIA, DRU HILL & 702. The Circle of Sisters’ R&B Live concert honors women and the music they love. This star-studded event is set for Sunday, September 30, at 7 p.m. at Prudential Center. Tickets will be available to purchase starting Friday, July 20 at 10 a.m. EST at ticketmaster.com or by calling 1-800-745-3000. Tickets will also be available on Monday, July 23 after 11 a.m. at the Prudential Center box office.

Bell Biv Devoe (BBD) is a direct by-product of the hugely successful multi-platinum super group New Edition. BBD was one of the first groups to successfully merge Hip-Hop beats, New Jack Swing and R&B harmonies with a pop twist. Their iconic hit, “Poison” topped several music charts and remains just as popular today. BBD’s debut album Poison included hits "Do Me," "When Will I See You Smile Again," and "BBD...I Thought It Was Me”, which was a 4x Platinum success. Since the early days with New Edition, BBD has sold over 20 million albums worldwide and recognized with numerous GRAMMY nominations, American Music Awards and Soul Train Awards including a recent Lifetime Achievement Honor.

The King of Stage, Bobby Brown’s solo career took off after he broke away from famed R&B group, New Edition. Creating music with a unique mix of R&B, soul and new jack swing, Brown owned the radio airwaves on multiple formats in the early 90s with hits like “My Prerogative, “Every Little Step,” and “Rock With You.” An international icon known for his incredible stage performances, Bobby is sure to bring that same passion and entertainment when he hits the stage later this year.

Heralded as one of the best R&B singers of the past 25 years by Billboard, Brandy will join the Circle of Sisters line-up. As one of the youngest GRAMMY Award winners, the sensational performer, singer, songwriter and actress will perform a variety of her #1 singles such as, “I Wanna Be Down,” “Never Say Never,” and more

There is nobody that demonstrates R&B Live like Tamia. The vocalist, songwriter and producer, will perform her iconic ballads “You Put a move on My Heart,” “Stranger in My House,” “Into You” and more!

Dru Hill will ignite the stage with their high-energy performance. Best known for their songs, “In My Bed,” “Tell Me” and “The Thong Song,” the group’s singles climbed up the R&B and Pop Billboard charts, receiving enormous airplay, countless awards and recognition for their outstanding voices and performances.

“Where My Girls At?”, the anthem from the girl group 702, will be in the house getting all the ladies moving and grooving. Their 1999 hit topped music charts internationally and sold over 1 million records. 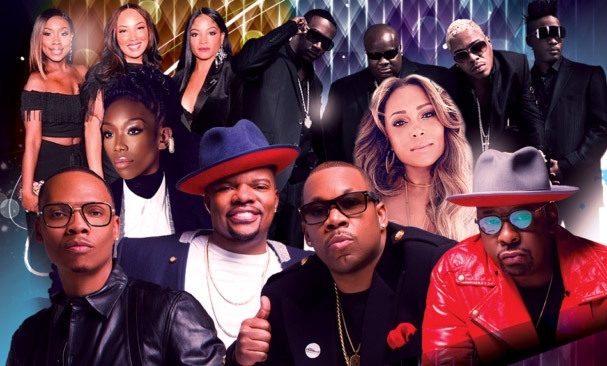