NEWARK, NJ ( May 13, 2019) – The biggest names in freestyle music, including female pop sensation Expose, The King of Freestyle Stevie B., The Queen of Freestyle Lisa Lisa and Freestyle Legends TKA K7 collaborate to perform their biggest rhythmic dance hits during the Freestyle Explosion Concert at Prudential Center on Saturday, November 2.

Tickets go on sale to the general public on Friday, May 17 at 10 a.m. EST at ticketmaster.com. Tickets will be available in person at Prudential Center Box Office on Monday, May 20 at 11 a.m. EST should inventory remain. Tickets via Prudential Center pre-sale are available on Tuesday May 14 through Thursday, May 16. EST. To sign up for Prudential Center pre-sale, fan may CLICK HERE. Prices are $45.00,  $55.00, $65.00 and $75.00 plus fees, along with a limited number of Gold Circle/VIP packages  for $150.00 which includes a ticket in the first 10 rows plus an event T Shirt, Event, Poster and a VIP laminate and lanyard .

Fans should tag #FreestylePru and @Prucenter in their social media posts as they prepare for Freestyle Explosion.

“One of Prudential Center’s driving goals is to continue to expose the New Jersey region to a diversity of live, musical performances that might inspire future generations of performers, singers, songwriters and musicians to pursue the arts,” said Sean Saadeh, EVP of Entertainment at Prudential Center. “We are thrilled to welcome New Jersey’s largest Freestyle event, Freestyle Explosion, and some of the world’s most popular freestyle performers to our stage.”

This lineup influenced the 80’s with their style of music which remains widely popular and in rotation with today’s hits.  Singer, songwriter and producer STEVIE B. who was influential in the Latin freestyle music scene of the late 1980’s, is best known for his No. 1 ballad “Because I Love You” as well as party jams “Spring Love” and “Party Your Body".

Lisa Lisa rose to fame with certified Gold single, “I Wonder If I Take You Home,” which was released along with her band Cult Jam and huge follow up hits such as “Can You Feel The Beat”, "Head To Toe”, “Lost In Emotion” and the smash ballad "All Cried Out".

American vocal group, Exposé achieved much of their success in the late 80’s and early 90’s when they became the first group to have four Top Ten hits on the Billboard Hot 100 chart from their debut album including their No. 1 single “Seasons Change”. Their other major hits include “Point of No Return”, “Come Go With Me” and “Let Me Be the One”.

TKA with front man K7 is one of Freestyles favorite groups. High energy dance and choreography is one of their signature trademarks and have had hits such as “One Way Love”, “Maria”, “Louder Than Love” and “Tears May Fall”.

The Jets, who were a Polynesian-American family band from Minneapolis were one of the 80’s most successful cross over groups  with top hits such as “Crush on You, “Make It Real”, “You Got it All” and "Rocket To U"

Linear featuring founding member Joey Restivo is as  American freestyle pop group that emerged from the Miami dance-pop scene in the late 1980’s. The group’s song “Sending All My Love” became a Top Ten hit for Linear when it was picked up by Atlantic Records in 1990. Along with “Don't Come Crying" and others, the group has sold millions of records and has performed all over the world.

R&B group Nu Shooz fronted by husband-and-wife team of John Smith and Valerie Day scored two major hits on the Billboard Hot 100 in singles “I Can’t Wait” and “Point of No Return”.

Debbie Deb scored big with her number one hit “Lookout Weekend” which  became one of the 80’s most requested radio songs ever along with "When I Hear Music” which today is still an anthem for Freestyle music fans!

George Lamond is an American freestyle music and salsa music singer who has been known to woo the ladies.  He has released 7 albums between 1989 and 2014 and is best known for his 1988 for Billboard debut “Bad of the Heart” . . His number 1 salsa smash “Que Te Vas” was RIAA -certified Gold.

JJ FAD is a female pop and rap group from California who brings amazing energy to any stage! Their mega hit “Supersonic”  remains today one of concert goers favorite songs and will have the audience standing for their entire set! 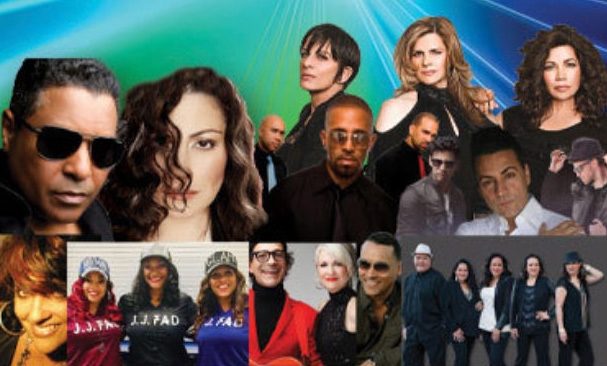